VIRTUAL CONTEST OF THE CHINESE MARKET

Under the aegis of Monaco’s Embassy in China, Monaco Economic Board supported by an Interministerial Delegation for Attractiveness and the Digital Transition participated in the China International Import Export (CIIE) fair via a virtual national pavilion. It was a hybrid in-person/online event opened by President Xi Jinping, held from 5-10 November in Shanghai.

CIIE is a major trade fair for Chinese importers and any international company wanting to set up business in China or sell products and services into the Middle Kingdom.

MEB had asked members to take part in the digital pavilion, an opportunity snapped up by a dozen companies who showcased what they had to offer in sectors ranging from pharmaceuticals, ICT, food processing, trade, real estate and jewellery.

An avatar was created for visitors to move from one pavilion to another (145 countries represented) in a 3D metaverse-type universe.

It was a chance for visitors from all over the world, especially Chinese businessmen to learn more about Monaco’s institutions and companies, most of which are already active in China. Over the five days, the CIIE received 60 million visits. 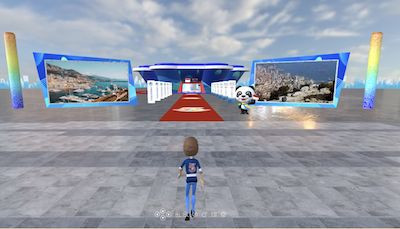